Step Bushings – TCW’s custom Step Bushings solve the loosening of the entry steps over time.  TCW’s Step Bushings are solid bushings that fit inside the step tube and give the bolt that holds the step to the step mount something substantial to grab onto.

Fuel Fittings – TCW’s custom Fuel Fittings adapt the standard AN bulkhead fittings to the 1” diameter pre-punched holes for the fuel line from the tunnel area out to the fuselage. 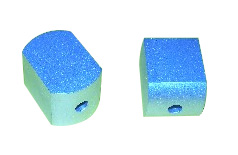 Step Bushings – The steps on the RV-10 are known to loosen over time, which could be caused by the bolt that holds the step to the step mount really doesn’t have anything substantial to work against when it is tightened. In addition, as the bolt gets tightened, it crushes the step tube and bracket, making the step oval instead of round. Therefore, TCW created a solid bushing that fits inside the step tube to give the bolts something to work against. With the bushing pressed inside the tube a real clamping force can be established between the step tube and the step bracket.  The hole in the bushing is LARGER than the actual bolt so the bolt would easily pass through without any difficult alignment issues. The hole is 1/4″ and the bolt is an AN-3. 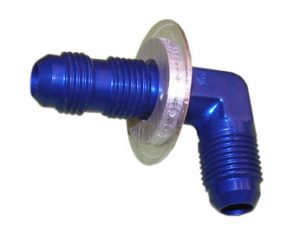